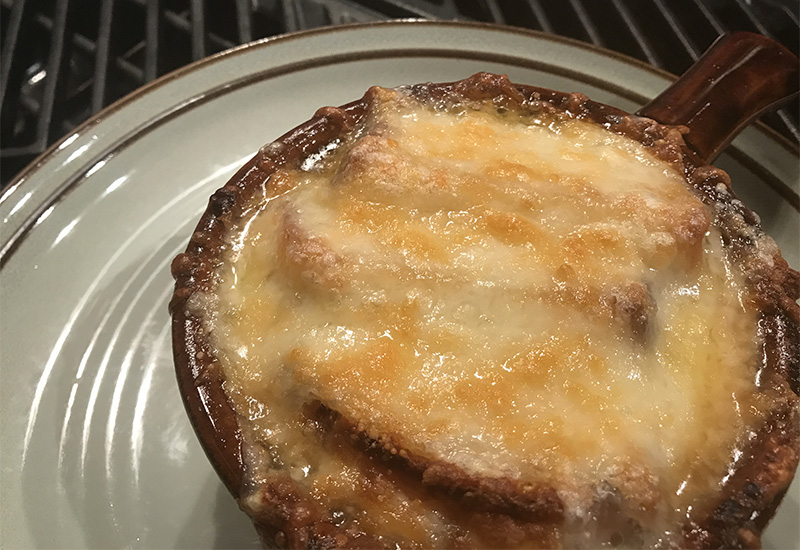 Julia Child was about a foot taller than I am, and roughly a thousand times better a cook. The genius of her recipes is that you can make them with nearly endless variations (or follow the instructions to the letter) and they will turn out beautifully.

My version of her onion soup, prompted by this weekend’s cold rain in my part of the country, is not too different from the original. Working my way through college in a local restaurant, I fell in love with the thick mixture of cheeses they piled on their soup. Thankfully, we now know that cheese is not the enemy all the low-fat “experts” used to claim. Layer it on!

I also use lots more onions. This increases the onion–to–broth ratio to the point that the bowl is loaded with sweet and tangy onions. Additional butter and a little broth make the roux for a richer, nearly casserole–like effect. You do need croutons to hold up that cheesy layer… find a rich asiago cheese loaf, cut it thinly, and enjoy the little indulgence.

If you’re watching your carbohydrate intake, this recipe isn’t ultra–low, but it won’t push you too close to your limit, either. Vegetarians will do quite well with a vegetable broth — it won’t be the typical onion–soup–brown, but the browned onions and the remaining flavors will keep it delicious.

Put on your pearls, pour a glass of wine, and get cooking.

Print Recipe
Soupe á L'Oignon, with thanks to Julia Child
Thick onion soup in a beef broth, topped with homemade croutons and a pile of melted cheese 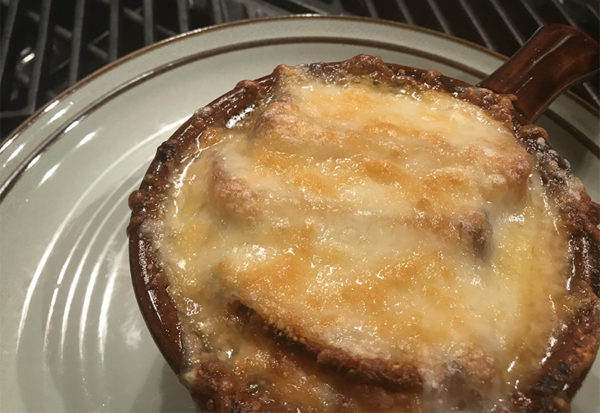 She’s a Registered Dietitian, Certified Strength and Conditioning Specialist, a personal trainer, athlete, lover of fine literature and (just about) all music. Her current projects are bringing nutrition education to athletes to help them prepare for life after retirement and challenging perfectionists to chill. She's also a Nerdy Science Girl. Follow her stories promoting healthy lifestyles from the inside out!

This error message is only visible to WordPress admins